Want to Sponsor an Animal?

You can sponsor any of the animals who live at The White Pig Animal Sanctuary!

Here are just a few of the animals that live at The White Pig Animal Sanctuary.

Teddy is an ex-racehorse who was rescued out of Penn National. After suffering a racing  injury  that required time off and rest, Teddy found that his owner’s and trainers no longer wanted him. Like most racehorses, his life hung in the balance, because many racehorses in Teddy’s situation end up on the kill floor. But Teddy was one of the lucky ones. An organization called The RACE Fund negotiated with his owner to sign him over to them. The RACE Fund has no sheltering facilities, so he entered The Thoroughbred Retirement Foundation. While volunteering at The TRF at The James River Correctional facility, I heard about Teddy. Teddy was rescued in 2010. He was under weight, had very bad rain rot and was suffering from a locking patella. After coming to The White Pig, we got Teddy on a healthy diet, gave him supplements,  and he received regular chiropractic  work and acupuncture. Teddy is now a healthy, happy horse with no lameness issues to speak of. Teddy is a puppy dog in a horse body and loves spending time with guests. 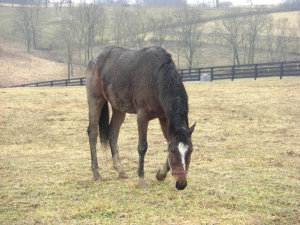 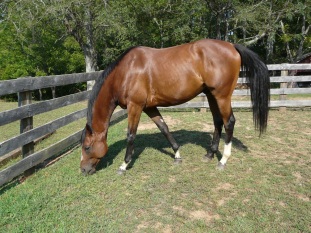 Before & After Photos of Teddy

Cassandra aka Cassie was rescued in April of 2002 along with her eight 2-day-old piglets. She was saved from a horrible situation and was badly malnourished and feral. We started her immediately on a proper diet to feed all her piglets and she was able to nurse all her piglets.  It took many months, but Cassie and her babies were all socialized and grew up to be happy and healthy pigs. Cassie’s herd are now seniors and enjoy their meals and laying in the sunshine: the retired life. Unfortunately Cassie passed away in in August of 2015 at the age of 15 1/2 and she lost her two boys Julius (in 2010) , Cloud (in 2015) to cancer; Bailey passed away (in 2017) from congestive heart failure.

Before & After Photos of Cassandra and the herd

Barkley was found chasing cars in Schuyler in the fall of 2011. We picked him up and brought him home, fearing he would get run over. We immediately posted in the neighborhood, and within 2 days we had found his people. They said they’d be by to pick him up, but several hours passed and no one came. Later that evening we received a call from his people saying that they didn’t want him anymore and could we keep him. It is no accident that his name is Barkley, because he still likes to chase cars (this time behind a fence) and barks a welcome to incoming guests.

Before & After Photos of Barkley

Iggy (Pop) was rescued from a local shelter run by animal control. Iggy was picked up as a stray and, for reasons we can’t identify, deemed a dangerous pig and was therefore quarantined for 2 weeks before he would be sent to a slaughter auction. Thankfully, animal control agreed to surrender him to the sanctuary instead. Iggy turned out to be just the opposite of dangerous. He is one of the sweetest pigs on the farm, always ready for a belly rub.

Before & After Photos of Iggy

Bob (Mould) was rescued in early January 2017. He was picked up as a stray by animal control in a neighboring county. Because he was not socialized, they feared that he would not be adoptable and asked The White Pig to take him. He is still not fond of being touched but does enjoy company. Update (9/1/17) When Bob was found running loose he was with a female pig named Princess Mudea, who was pregnant, who went to an inexperienced foster, who had to be rescued again. Her second foster took care of her and her babies, and after her babies were weened, she was spayed and came to live with Bob. 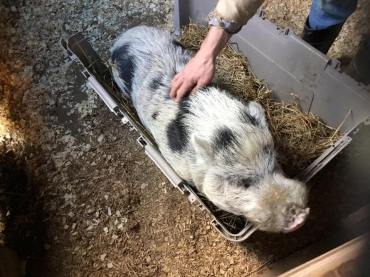 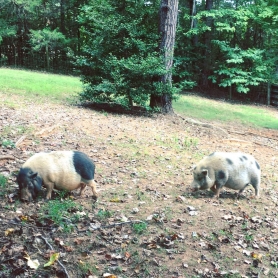 Before & After Photos of Bob (Mould)

Gordy is an adorable, sweet white pig who was starving and living alone without a house, bedding, or water in the middle of the winter. A local hunter was asked to come shoot Gordy because his people didn’t want him any more. Luckily, the hunter approached a local dog rescue instead, who intervened and brought him to The White Pig. 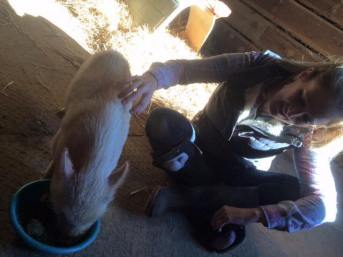 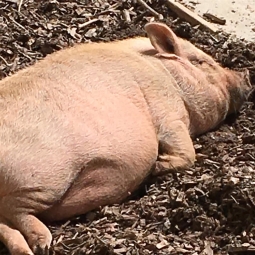 Before & After Photos of Gordy